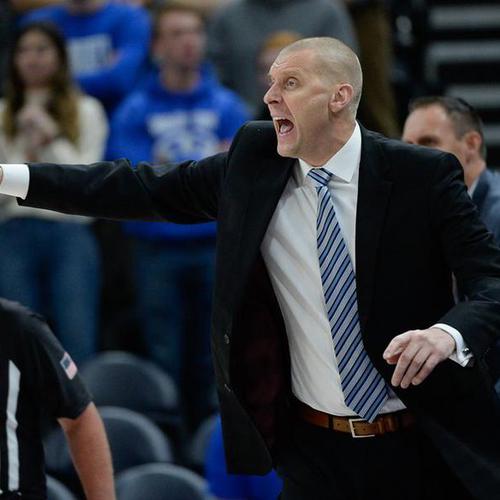 Mark Pope was hired as head men’s basketball coach at BYU on April 10, 2019. In his first season in 2019-20, Pope led the Cougars to a record of 24-8, the most wins for a first-year coach in program history. He is also the first BYU coach to end his debut season ranked as the Cougars finished the season ranked No. 18 in the AP Poll and No. 16 in the USA Today Coaches Poll.

The 2018-19 season was highlighted by a program-record 25 wins, a 14-1 home record and a 22-game home win streak that began in 2017 — also a Wolverine record and the second-longest streak in the country at the time. In 2017-18, Pope led UVU to a 23-11 record, including the best home mark in school history of 16-1. The season began with what was known as the #Toughest24 as Pope and the Wolverines opened on the road at No. 4 Kentucky and No. 1 Duke on consecutive nights.

Pope’s coaching career has also included stints as an assistant coach at Georgia, Wake Forest and BYU. While on Dave Rose’s staff from 2011-15, Pope helped the Cougars to four-straight 20-win seasons and four-straight postseason appearances – including three bids to the NCAA Tournament and trip to the semifinals of the 2013 NIT.

As a player, Pope helped Kentucky claim the 1996 NCAA National Championship. He played professionally for nine seasons, including seven in the NBA and two in Turkey. He played for the Indiana Pacers, Milwaukee Bucks, New York Knicks and Denver Nuggets in the NBA and helped the Pacers and Bucks reach the Eastern Conference Finals.

Before beginning his coaching career, Pope completed two years of medical school at Columbia University in New York. He did much of his pre-med course work while playing in the NBA. Pope and his wife Lee Anne have four daughters: Ella, Avery, Layla and Shay. Lee Anne worked at ESPN before serving as David Letterman's personal assistant for four years.